Holding Your Head Up in Church When You're Too Busy

(To get to the beginning of this series click here) 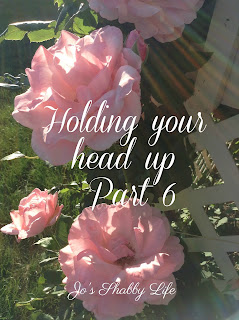 I’ve known a few people that have left the church because they simply became overwhelmed with the amount of ministry they were involved in.  They became bitter and in a way "martyred" themselves.  They left because they felt as if they were being taken advantage of and unappreciated.  When in reality they were taking on too much and not getting refilled with the Word.  They were not attending service, even though they were attending church.   If we are not careful, we allow serving to become an obstacle to receiving from God.   My last post talked about the need to serve and get involved.  Yes, we should serve, but it is important that we find a balance between giving and getting.   If you are not getting the Word of God in you and being filled yourself, then eventually you will have nothing to give.  Sometimes we get overzealous and want to help everywhere or we can’t say no when someone asks us to help in a ministry.   The trouble with it is that we are only human, and we get burned out.  When we get burned out, we get cranky and don’t want to be there.  (At least that is the truth for me!)   I’ve had to learn to say no and then not feel guilty about it.   There is a group of people in the church that will make you feel like you’re not serving God if you don’t do ‘all the things.’   That is so far from the truth!   There is certainly a special anointing on those who serve, and I know that God ministers to those who are serving outside of the service.  But we need to learn to balance out our serving with our receiving.   There were times when we had something going on every night of the week!  It really took a toll on our home life.  We had services three times per week.  We led bible study once a week.  We led financial classes once per week.  Our kids had youth group, which we had to provide transportation to and from. We would have different meetings to attend as well.  During the service times we were working in the nursery or driving vans.    All the busy-ness with church things kept us from attending the services.  At times we wanted to just stay home!


Our first place of ministry is in the home.   We must first be able to minister to our families before we can effectively minister to others.   I learned this the hard way.   While I was busy being about the “Lord’s business” my home life was falling apart.   We were eating fast food more than not, laundry was piled high, kids were struggling in school, we were cranky and arguing more over dumb stuff.   I wasn’t reading my bible because I was always on the run and prayer was happening as I was driving.   This is not the way our walk is intended to be.  My relationship with Jesus was suffering.    Then one day, I was driving to pick up one of my kids and came across a box in the road.   Everybody else was slowing down and going around this obstacle.   I too slowed down and started to go around it when I felt the Holy Spirit telling me to pull over and move the box.   My first thought was no, I’m already running late.  But out of obedience I did it.   I pulled over on the busy road and moved the box.  It was big, but empty.    I got back in my car and as I started driving away, I felt the Holy Spirit telling me that I needed to listen to Him.  That moving the box was simply an act of obedience and if I continued to listen, He would help me “move the obstacles” in my life at that time.   I know it sounds weird, but it was something I needed.   I contemplated on that the rest of the day. 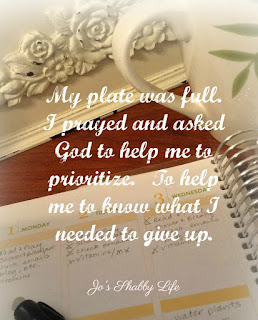 The next day I pulled out a calendar that I hardly ever used and started filling it in with all the things we had committed to.   I then added the things that needed to be done.   My plate was full.   I prayed and asked God to help me to prioritize.   To help me to know what I needed to give up.  There were some things on the calendar that had to stay until we fulfilled our commitment.  But,  I was able to start saying no to extra duties.   It was hard at first because I felt guilty about not helping when I was asked. However,  I also knew my need for being in the service.  I needed to hear the word and answer a few altar calls!   Luke 10:39 “She had a sister called Mary, who sat at the Lord’s feet listening to what he said.  But Martha was distracted by all the preparations that had to be made.”  I needed to strike a balance between serving in ministry and being fed God’s Word.  God showed me how to make that happen.  To this day I frequently will make sure that my calendar is not too full.   I can say no without feeling guilty.  If I feel strongly about taking on another ministry then I will let one go.  It is totally okay, because there will always be someone else who can do it.   We must guard ourselves and watch over our growth.  No one else is going to do it for us.  We need the water of the Word in order to grow and bear fruit.  If we give away all that we have and not take the time to refill, then we will wither away.

Email ThisBlogThis!Share to TwitterShare to FacebookShare to Pinterest
Labels: Staying in Church series