Holding Your Head Up in Church When You feel Shame 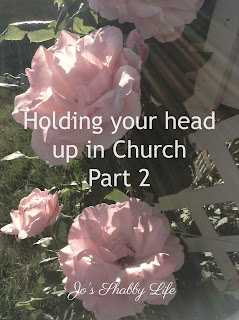 In my previous post I talked about resolving to stay with my church and serving God through that ministry.  That decision did not come without times of testing and trials.   Funny thing is when we are in a trial, we often don’t realize it until we are on the other side.  We just know that life is really hard at that moment.  Sometimes a more mature Christian will help us to realize and pray us through it.   I think that is one reason why God’s Word says to “Bear one another’s burdens, and so fulfill the law of Christ.” Galatian 6:2, NKJV.   We can’t make it alone.  We would just as soon throw in the towel than go through some of this stuff.   Before we knew Jesus, we would have handled things very differently.   And not in good ways.   Just imagine yourself handling some of the rough spots of life without Jesus.  I for one would have gotten drunk to numb the reality only to have to deal with it later.   Whatever the “it” was.  I would have made decisions that I’m sure I would’ve regretted later.   One such a time for us was when we learned our daughter was pregnant.

I remember like it was yesterday, calling my pastor and having to tell him that my 15-year-old daughter was pregnant.  My husband and I were co-leading the Sunday School Ministry with another couple. We thought our Pastor was going to tell us we had to leave the church, or in the least step down from the ministry.   We also thought we would make it easier for him by just offering to leave.   In our minds, we would leave our beloved church with our heads down and tail between our legs.  What a shame we were, leading a children’s ministry and our very own child was pregnant at such a young age.   So that’s what we did, we called our pastor and told him we were sorry for being “’bad examples” and that we would not come back.    His response, in part was, “You will not!  Do not give the devil the victory by leaving the very place that God placed you!”   He didn’t even require us to step-down from co-leading the children’s ministry.  He showed us such mercy and grace. 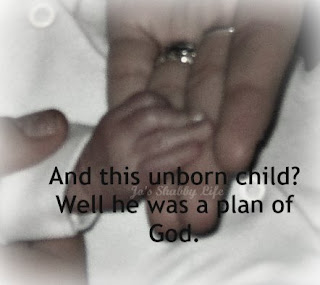 You may be scoffing or wondering why we would ever feel that way.  We were going to be first time grandparents after all!  Or maybe you’ve had something similar happen and you too felt like such a failure.   We felt like failures as parents, and ministry leaders.   The devil was quick to jump on our emotions and exploit them.   He caused us to feel shame for our situation.  We struggled with all of this for a short time, but after the initial tears were shed, and words were said, we prayed and let God rule.   He was still on the throne no matter our circumstance.   We loved our daughter in spite of what was happening.   She was 4 months along when we learned she was pregnant and delivered a short time later at just 7 months.  Our grandson was born weighing only 2 lbs 6 oz.  During what seemed like a “brief” pregnancy we held our heads up and went to church anyway.   We served God with an even greater zeal then before.  When we went to service, we lifted our hands high and praised God anyway.  We sat together as a family. We protected our daughter as best we could from hurtful words. It was hard when other Mom’s didn’t want their daughters hanging around ours anymore.   Yet God brought new friends into her life.   When we were working in ministry, we worked.  We knew that others were thinking the same thoughts we had had.  But we gave it our best to serve God and our church family with all we had to offer, anyway.    We stopped the “rumor mill” in its tracks by simply announcing it ourselves.  It was done, and it wasn’t changing.   God was holding our hands and completed a quick work of grace in our lives.  He had grace for us.  We had grace for our daughter.    God knew we were going to need our church family to pray and surround us with faith and love during this time.  And this unborn child?  Well he was a plan of God.    Jeremiah 1:5  says “Before I formed you in the womb I knew you, before you were born I set you apart…”  There was absolutely no reason for us to feel “shame” except by the worlds standards and the enemies lies.

“Don’t give the devil the victory by leaving the very place that God has placed you!”  These words from our Pastor have stuck with us through many trials.  The devil has and will probably continue to shoot his fiery darts at us.  We know he would like nothing more than to move us and you out of God’s will.   If you are out of his will then you can’t do anything to further the Kingdom of God.   You get wrapped up in you, your feelings, your self-pity and you can’t hear what God is saying to you.  Is this  the church God has put you?  He didn’t change his mind did he? Don’t let the devil make you think he did.   Hold your head up.   Go to church.   Lift your hands a little higher.  Praise a little louder.   Pray a little harder.   Serve as if your life depends on it, because it does.   God didn’t change his mind.   He puts us in places where we can be taught, if we’ll allow it.   Our first grandson just celebrated his 16th birthday, he is saved and serving God right along side of us, in this same church!  To God be the Praise! He is good, we just need to let him be God!
Click here to read the NEXT IN THE SERIES

Email ThisBlogThis!Share to TwitterShare to FacebookShare to Pinterest
Labels: Staying in Church series