Teddy Bear Tea in the Garden

Happy Saturday everyone!  I read the following story a few years ago and thought it was cute.  I also think it would be a wonderful story to read to little tea party goers as a nice lead in to teaching about manners.  I found it at this website: http://www.victoriana.com/christmas/teddybear.html 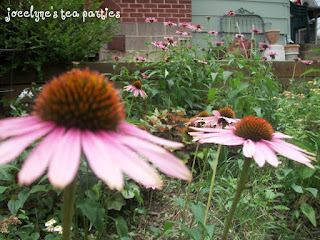 I have added pictures of my own teddy bears and a mini teddy bear tea set on a vintage child's table and chairs set.   This was a fun and playful setting.   My daughter took all of the pictures. 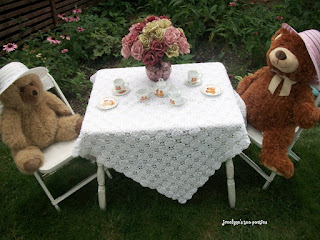 IT was Betty who delivered the invitation, in such solemn fashion that the Teddy Bears all sat down on the bed to consider. As Betty went on to explain they were all attention; even Baloo, the Indifferent One, cocked his stubby ears and leaned forward until Ab, his small charge, nearly toppled over on his nose. Of course they would go; but what should they wear? Peter— big, tawny Peter—thought his pink neck-ribbon would be more becoming than his blue; yet he did so love blue. Little Scrub, sitting beside his beloved Barbara, wondered if it would be quite proper to wear his blue jeans. You can't imagine how excited they were: one isn't invited to a tea party every day — that is if one is a Teddy Bear. Not that they cared about the tea, but they did hope there would be plenty of honey. 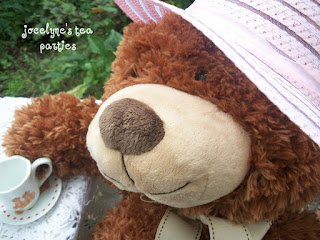 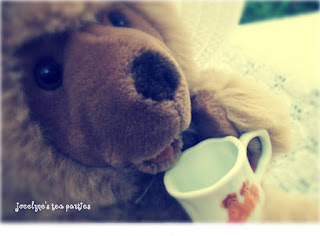 NOW, a tea party means a rehearsal of one's manners. At that thought most of the Teddy Bears scampered away and pretended to be busily washing their paws (Betty never interrupted them in that!). Ab and Ba, the twins, climbed into Baloo's lap and declared they'd be very good. But Peter had a request to make: Might he sit at the head of the table? Betty said he might if he could find the head of a round table. 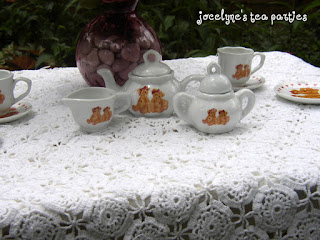 WELL, the party was a success. Each Teddy Bear wore a fresh neck-ribbon and his jauntiest manner; except Scrub, who would keep on his blue jeans, so they made him sit in the window by himself. Peter was wonderful and Betty couldn't eat for admiration of him. As there weren't chairs enough to go around some perched on the tops; and though, at this dizzy height, they couldn't manage tea-cups, they all had lots of honey; till even Peter lay back sleepy and satisfied. 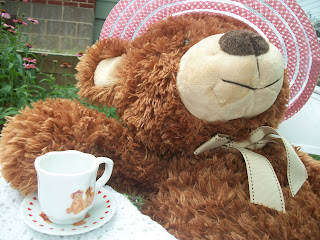 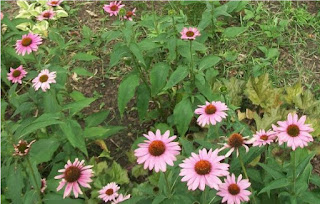 I am joining Bernideen today as she hosts Saturday Tea in the Garden.